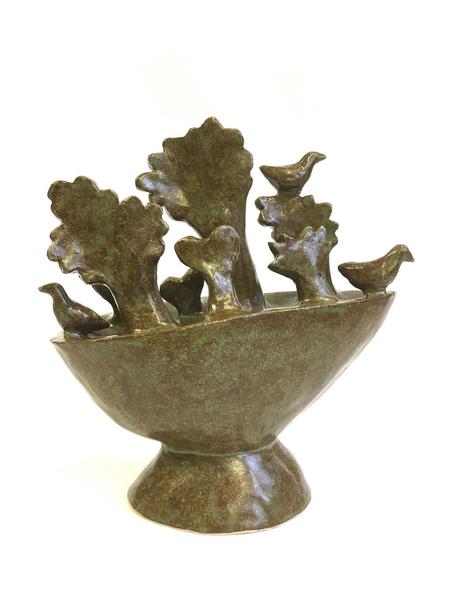 I make figurative sculptures with a strong narrative thread using a mix of animal and human imagery. I wish to explore our relationship to the world with an emphasis on inter-dependence and compassion for all forms of life.

Much of my inspiration is drawn from ancient art when human life was much more connected to the natural world. I am particularly interested in the continuing relevance of the combined human/animal figure, which links us back to the heritage of our deep prehistoric past. Animal forms and postures strongly lend themselves to portraying mood and feeling. With the addition of human elements this can be a powerful communicator having the effect of confusing our logical mind and allowing the viewer to mover towards a more symbolic way of thinking.

I work with many mediums; bronze, ceramics and mixed media, including papier mache, paper pulp, fabric and stitch and plaster polymer. I also make prints and collage. Moving between different mediums helps maintain a feeling of discovery and immediacy. This keeps a sense of play alive which is, for me, a prerequisite for creativity.

My studio can be visited by appointment throughout the year.

Get directions from Google